Home » GENERA I-L » Leucospermum » Leucospermum patersonii
Back to Category Overview
Total images in all categories: 11,921
Total number of hits on all images: 7,168,444 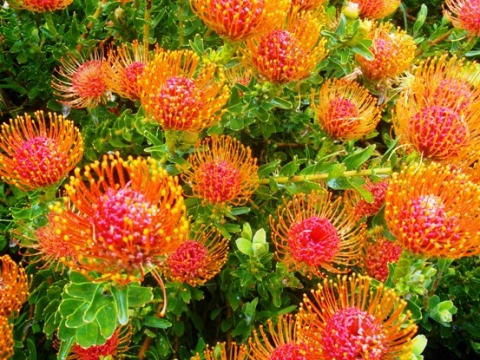 Leucospermum patersonii is a large, rounded shrub or small tree reaching 5 m in height (SA Tree List No. 85). It has grey-brown bark upon its single main stem and stout lower branches. The upper stems are covered in brownish grey hairs. The hairless, sessile leaves are broadly oblong, their obtusely pointed or rounded tips have three to eight glandular teeth. The leaf base is somewhat lobed, sometimes broadly.  Leaves overlap each other upon the stems, closely ranked.

The stem tip flowerheads may grow solitary or in groups of up to three. They are orange turning crimson when mature, showy or partly hidden among the leaves. Flowerheads are borne erectly, measuring 9 cm in diameter. The styles are red in their upper parts and curve in near the tips. The pollen presenters are large and hoof-shaped. The silky perianths become 3 cm long, the styles up to 5,5 cm. Flowers are seen from late winter to early summer.

The species used to grow from Kleinmond to Agulhas, the distribution now reduced to two parts, one around Kleinmond, the other south of Stanford to the Elim Flats, but lost from the Hermanus area. The habitat is limestone coastal slopes and flats. L. patersonii is considered to be vulnerable in its habitat early in the twenty first century (Coates Palgrave, 2002; Privett and Lutzeyer, 2010; http://redlist.sanbi.org).