Home » GENERA I-L » Leucospermum » Leucospermum cordifolium
Back to Category Overview
Total images in all categories: 11,632
Total number of hits on all images: 6,749,655 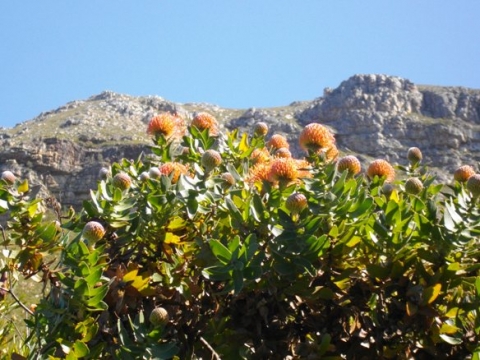 The nodding pincushion, as Leucospermum cordifolium is commonly known, occupies a position of favour in the minds of many fynbos lovers.

Both delicate in the curvature of the multitude of stigmas in each flowerhead and robust in the spreading branches of the dominant shrubs adorning so many rocky slopes in the south-western Cape, it catches the eye wherever it is found.

Cut flowers of this pincushion last particularly well; even purists that don’t normally like to remove flowers from the plant concede that the spring and early summer flower profusion of this one allows for the removal of a few flowers without detracting from the appearance of a mature shrub.

The common orange and yellow flower colours vary somewhat, with salmon, apricot or pinkish variations also being found. And so does the flowering season, depending on the climate of the specific area or the weather of a specific year (www.plantzafrica.com; Eliovson, 1967).