Home » GENERA I-L » Leucospermum » Leucospermum catherinae
Back to Category Overview
Total images in all categories: 10,366
Total number of hits on all images: 5,071,864 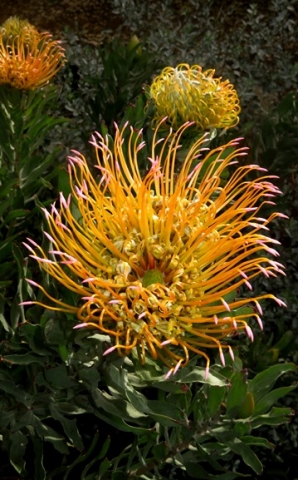 Previous
Image 6 of 92
Next

Leucospermum catherinae, commonly known as the wheel flower or Catherinewheel pincushion, is a much-branched shrub that reaches 3 m in height.

The flowerheads grow at stem-tips, flowering yellow to orange or bronze from spring to early summer. The style tips are twisted clockwise, explaining the wheel flower name. The diameter of the somewhat flat-topped flowerhead is about 15 cm.

The species distribution is in the Western Cape from Clanwilliam to Piketberg and the Hex River Mountains.

The habitat is damp, fynbos upper slopes in sandstone-derived soils in an area known for its cold winters. The plant is considered to be threatened in its habitat early in the twenty first century due to habitat degradation from pollution (Manning, 2007; Eliovson, 1983; iNaturalist; http://pza.sanbi.org; http://redlist.sanbi.org).