Home » GENERA I-L » Leucospermum » Leucospermum calligerum
Back to Category Overview
Total images in all categories: 10,366
Total number of hits on all images: 5,071,695 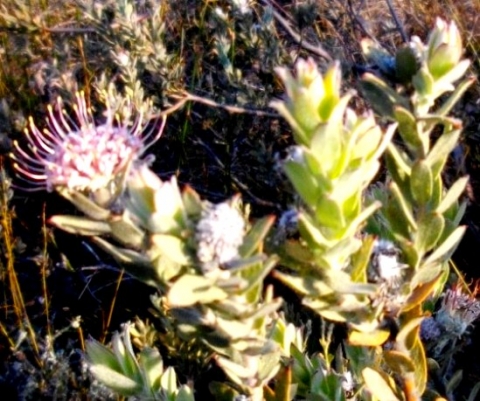 Previous
Image 4 of 92
Next

The common name of pincushion is shared among several Leucospermum species. It refers to the multiple knob-tipped styles standing erect from the flowerheads. The dense collapsed mass below them in the flowerhead consists of perianths and stamens that have split open to release the styles.

The Afrikaans name of luisiesbos (little lice bush) is said to refer to the resemblance of the nutlet seeds to lice.

The distribution of the arid pincushion, Leucospermum calligerum, lies in the Western Cape inland from Niewoudtville to Riversdale, notably also on the Houw Hoek Mountains and at Greyton. The habitat is dry sandy fynbos plains and slopes (Manning, 2009; Bond and Goldblatt, 1984).