Home » GENERA I-L » Leucospermum » Leucospermum bolusii
Back to Category Overview
Total images in all categories: 11,235
Total number of hits on all images: 5,944,795 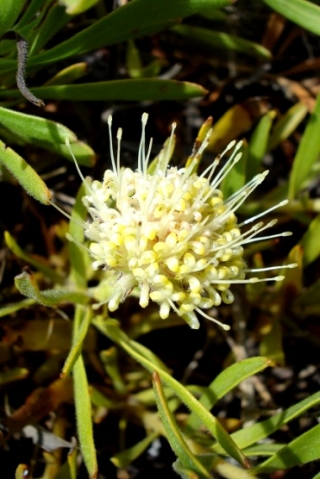 Previous
Image 1 of 95
Next

The flowerhead of Leucospermum bolusii is small, compared to many of the commonly seen garden species, or the conspicuous orange and yellow flowering ones in the fynbos. Each creamy white flowerhead is only about 2 cm in diameter, comprising 50 to 100 individual flowers. Instead of a single flowerhead as seen in the photo, there are often three or four, sometimes up to ten flowerheads at one branch tip. These large, dense clusters are presented in spring and early summer.

White pincushion flowers such as seen here, are uncommon. Before the individual flowers have opened as in the photo, the pollen presenters already erect here and the perianth segments curled back to form a dome-shaped head, the dark tips of the individual buds formed a flat top on the young flowerhead. Different stages of development are often seen in one cluster. The creamy white flowers are faintly fragrant (www.plantzafrica.com; Eliovson, 1973).