Home » GENERA I-L » Leucospermum » Leucospermum bolusii
Back to Category Overview
Total images in all categories: 11,419
Total number of hits on all images: 6,200,148 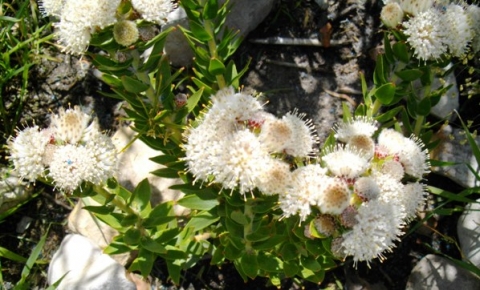 Previous
Image 2 of 95
Next

Leucospermum bolusii is a perennial shrub with clusters of white flowers blooming in spring and early summer. The rounded bush may reach a height of 1,5 m and it yields good cut-flowers as do many of the 48 Leucospermum species, mostly endemic to the Western Cape.

Fire is a risk as the plant does not regrow if badly burnt, but the seeds do survive. The seeds of this pincushion are often carried underground by ants for the food provided by the fleshy part or elaiosome inside the skin. The seed itself is not affected by the ants; it will germinate later in favourable conditions, making the ants good partner.

L. bolusii grows naturally on the mountain facing the eastern coast of False Bay from Gordon’s Bay to Kogel Bay, giving rise to its common name of Gordon’s Bay pincushion.

In spite of a small distribution the plant is well established in its habitat, a region where protection is reasonably well in place. Still, it is considered to be near threatened in its habitat early in the twenty first century (www.plantzafrica.com; http://redlist.sanbi.org).