Home » GENERA I-L » Leucadendron » Leucadendron laureolum
Back to Category Overview
Total images in all categories: 8,988
Total number of hits on all images: 3,989,694 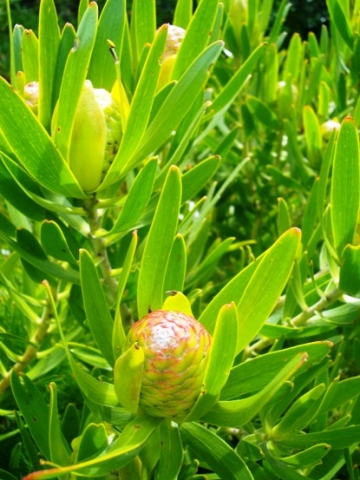 The leaves of Leucadendron laureolum, the laurelleaf conebush, are oblong and hairless. When involucral leaves cover the flowerheads they are yellow. This plant shows the mature female cone after the flowering season, which occurred in winter, mainly in July. The photo was taken at the end of September. By now it has lost the yellow colouring on the involucral leaves. Leaf tips end in distinct recurved points that appear red on the leaves in picture.

The cone harbouring seeds has eight shallow spiralling grooves. Its colour is green with yellow and red, changing as it ages. While male flowerheads drop off after their functional season, the female ones grow large as in the picture and remain on the plant for some years, protecting the ripening seeds until the time is opportune for germination.

The distribution is from the Cape Peninsula to Swellendam (Bond and Goldblatt, 1984; Manning, 2007; www.plantzafrica.com).