Home » GENERA I-L » Leucadendron » Leucadendron corymbosum
Back to Category Overview
Total images in all categories: 8,883
Total number of hits on all images: 3,863,557 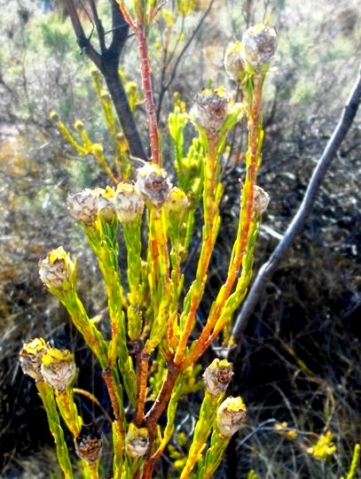 Previous
Image 2 of 35
Next

The swartlandtolbos, Afrikaans common name of Leucadendron corymbosum, is a giveaway as to the plant’s distribution area. The Swartland lies in the Western Cape from about 50 km north of Cape Town to Piketberg on the undulating plains to the west of the mountains. The name dates from Jan van Riebeeck’s time, who coined the name “Het Zwarte Land”, referring to the predominant shrub of Elytropappus rhinocerotis or renosterbos.

This sandy soil area is so intensively farmed today, an important wheat producing region, as well as vineyards where water is available, that indigenous vegetation has been largely eradicated. Close to the mountains in the east, like at the Elandsberg where this plant was photographed, small pockets of treasured plant diversity have become popular and diligently conserved.

The swartlandtolbos also grows across the mountain range from Tulbagh to Worcester. Where farming land remains fallow for long, this is one of the plants that tends to regain some presence, provided that seeds are still available on the land (Bond and Goldblatt, 1984; Wikipedia; http://redlist.sanbi.org).