Home » GENERA I-L » Leucadendron » Leucadendron corymbosum
Back to Category Overview
Total images in all categories: 9,390
Total number of hits on all images: 4,217,467 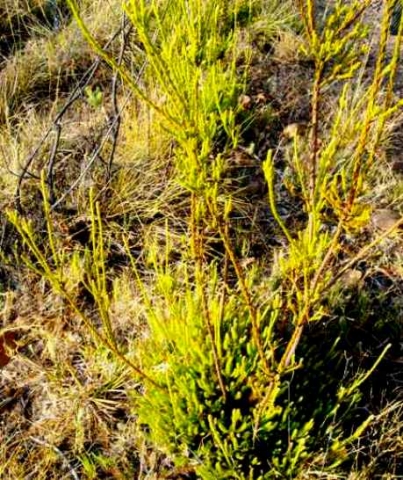 Previous
Image 6 of 45
Next

Leucadendron corymbosum is known in Afrikaans as the skraaltolbos (slender leucadendron) and the swartlandtolbos. The growth habit is erect to heights of about 2 m. The ericoid leaves are densely clustered on branched stems, especially lower down on the plant. Leaves cling in flattened manner to the stems. A few lanky erect stems characterise the sparse upper parts of the shrubs where the flowers grow.

Flowerheads are yellow, the sexes represented on separate plants. A few long, narrow bracts grow around each capitulum or flowerhead. The persistent female cones are conspicuously brown and woody when dry after the seeds have been released.

This is an endangered species (Bond and Goldblatt, 1984; Wikipedia; http://redlist.sanbi.org).