Home » GENERA I-L » Leucadendron » Leucadendron argenteum
Back to Category Overview
Total images in all categories: 8,979
Total number of hits on all images: 3,981,847 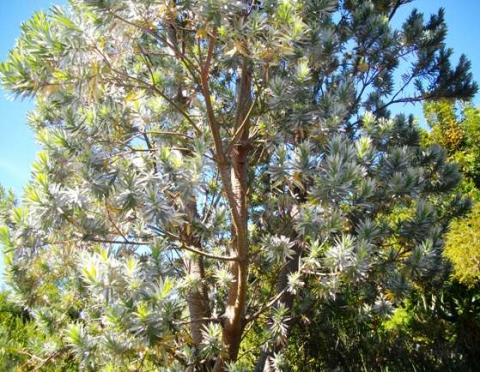 Leucadendron argenteum, the silver tree or in Afrikaans the silwerboom or witteboom, is a remarkably beautiful tree that is well loved and admired (SA Tree List No. 77). Its natural habitat is only a limited part of the Cape Peninsula. this being such a densely populated and intesively developed area, the tree is unfortunately in decline in nature and officially in the category of endangered species early in the twenty first century.

More than half of the natural silver tree habitat is now lost. About three quarters of the natural population of silver trees of the area is already gone according to available records. Even the biggest remaining population, found above Kirstenbosch, has been reduced by several causes, only some of which can be countered.

Not all is negative. Much of the remaining habitat of this cherished tree is today protected. Stands of these trees have appeared near Somerset West and Stellenbosch. The extended knowledge about growing the silver tree is supplemented by enthusiasm for retaining it in the wild as well as by a stronger representation in cultivation, in parks and gardens. Maybe there is a sufficient grip on the situation for conserving this valued tree for many generations to come (www.plantzafrica.com; www.redlist.sanbi.org).