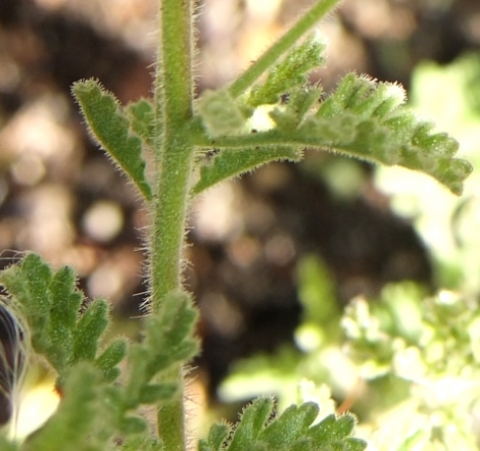 The mostly alternate, occasionally opposite, grey-green leaves of Jamesbrittenia bergae are obovate to elliptic and lobed or toothed. They grow on stalks between a quarter and a third of the leaf length. A covering of glandular hairs is present, the whitish hairs varying in length in the photo. The leaves reach a length of 1,5 cm and 5 mm in width.

The species distribution is limited to a small region in the Thabazimbi area in the west of the Limpopo province. The habitat is scrub and grass vegetation in mixed bushveld, exposed to full sun on southern slopes of iron-rich outcrops. The species is considered vulnerable in its habitat early in the twenty first century due to agricultural activities, although the population is currently stable.

The plant is thought to have a good future as a gardening plant, based upon its eye-catching crimson flowers suggesting luminosity and the ease of growing it from cuttings or seed. The plant is fast-growing, but lasts only for a few years (www.plantzafrica.com; www.redlist.sanbi.org).