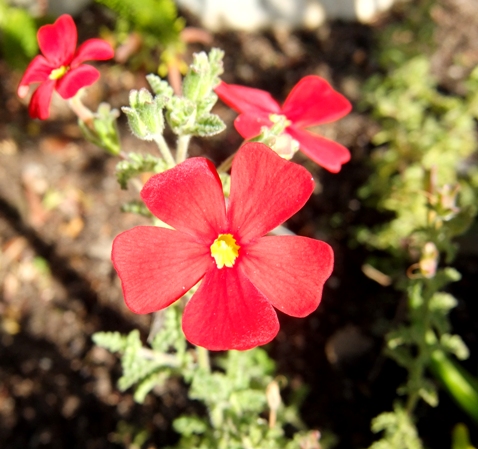 Jamesbrittenia bergae, commonly known as crimson flox, is a perennial herb that grows to 50 cm in height. It branches to spread to similar width in a dense mound from a woody rootstock.

In spite of its spectacular flowers that resemble those of the parasite, Striga elegans, the late introduction of the species to the botanical world only happened in the 1990’s.

The flowers, growing solitary from upper leaf axils, have narrow corolla tubes of 1,5 mm long, the uppermost flower on a stem opening last. The flower tube has an abrupt widening in a sharp bend a short distance below the mouth, a common Jamesbrittenia characteristic.

The conspicuous flower feature of this plant is, however, the five wedge-shaped, crimson red corolla lobes that spread to 3 cm in diameter. The filaments are attached to the inside of the corolla tube, their anthers not reaching beyond the yellow throat.

A two-chambered fruit capsule of up to 1 cm in length follows the flower, releasing tiny black seeds when the ripe capsule splits (www.plantzafrica.com).