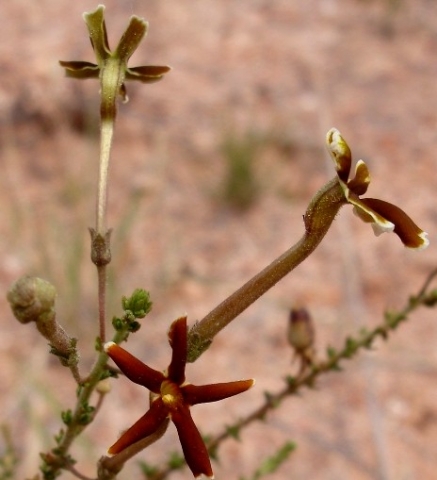 Jamesbrittenia atropurpurea subsp. pubescens, in Afrikaans the verfblommetjie (little paint-flower) or saffraanbossie (little saffron bush), is a shrub that grows to 1 m in height. In the really arid parts of its habitat only half of that. The small, opposite leaves grow in clumps, hairy in this subspecies as the name suggests.

The five-pointed star flowers are brown or orange with narrow, oblong petal lobes spreading to a diameter of 1 cm. The narrow, cylindrical corolla tube, becoming up to 2,5 cm long, has the characteristic Jamesbrittenia kink near the corolla mouth. Flowering happens in summer and autumn after rain.

The flowers of this plant have been used in the dyeing of wool, linen, wood and leather.

There are more than 50 Jamesbrittenia species indigenous to South Africa (Vlok and Schutte-Vlok, 2010; Shearing and Van Heerden, 2008).