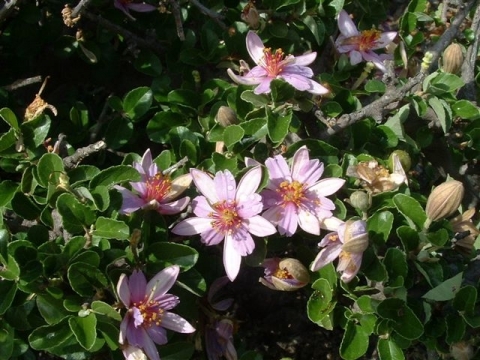 Grewia robusta, the Karoo cross-berry, is a rounded shrub or small tree reaching heights to 3 m (SA Tree List No. 463.6). It is similar to G. occidentalis, the cross-berry or kruisbessie in Afrikaans.

G. robusta has much smaller leaves, grows in a more compact fashion and flowers more profusely (in summer).

Their geographical distributions overlap, but the Karoo cross-berry has a much more restricted range in the east of the Little Karoo to the Fish River Valley in the Eastern Cape, while G. occidentalis is found from the Cape to Zimbabwe along the southern and eastern parts of the country.

Like Karoo plants G. robusta is drought tolerant, growing on arid stony slopes, often among dense scrub. This vegetation ranges from Nama Karoo, succulent Karoo and grassland to Albany thicket. The species is not considered to be threatened in its habitat early in the twenty first century (Coates Palgrave, 2002; http://redlist.sanbi.org).