Home » GENERA G-H » Grewia » Grewia occidentalis branch
Back to Category Overview
Total images in all categories: 10,525
Total number of hits on all images: 5,176,482 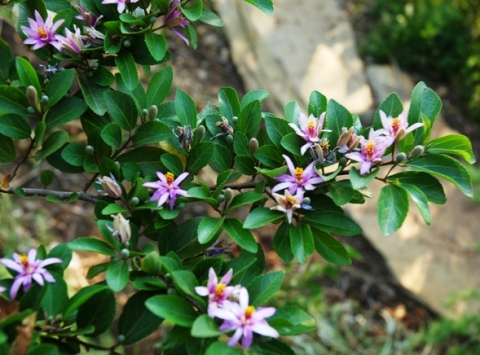 The cross-berry, as Grewia occidentalis is commonly known, grows throughout the eastern parts of South Africa as well as along the south coast. Its distribution extends into Lesotho, Swaziland and parts of Mozambique and Zimbabwe.

The cross-berry name refers to the square shape in which the four seeds are arranged in a fully developed fruit, forming a little cross where the fruits are joined.

The variety of the plant found in South Africa is known as G. occidentalis var. occidentalis. The other one, var. littoralis, grows in Mozambique.

The plant is important in traditional medicine and the fruits are sometimes eaten by people, birds and some mammals (Coates Palgrave, 2002; www.plantzafrica.com).