Home » GENERA G » Grewia » Grewia monticola
Back to Category Overview
Total images in all categories: 12,081
Total number of hits on all images: 7,379,514 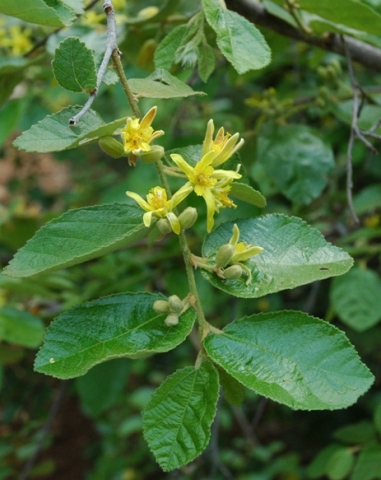 The grey raisin as Grewia monticola is commonly known, may reach a height of 10 m, typically around 3 m (SA Tree List No. 462). It was previously known as G. discolor. The species is quite variable across its distribution.

The leaves are asymmetrical or obliquely elliptic to ovate. The drooping branches, golden and velvety where the young leaves grow, are characteristic.

G. monticola has a large and diverse habitat, sometimes growing by riversides, on termite mounds and in open woodland in rocky or sandy soil at a wide range of elevations. The species is not considered to be threatened in its habitat early in the twenty first century (Coates Palgrave, 2002; Schmidt, et al, 2002; http://redlist.sanbi.org).