Home » GENERA G » Grewia » Grewia lasiocarpa flowers
Back to Category Overview
Total images in all categories: 12,061
Total number of hits on all images: 7,359,863 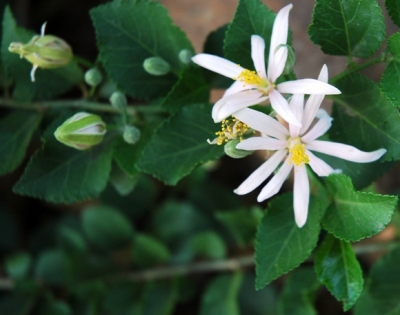 The forest raisin as Grewia lasiocarpa is commonly called, is an attractive large-leaved shrub or small tree that has found its way into gardens in many places (SA Tree List No. 461). The leaves are broadly ovate, three-veined from the base. Leaf surfaces are hairy. The flowers that look very white here are supposed to be pink. They become up to 3,5 cm in diameter.

The fruit is two to four-lobed and red-brown, 2,5 cm in diameter. Lasiocarpa means shaggy fruit.

The species grows naturally in KwaZulu-Natal and the Eastern Cape, commonly found at forest margins. The species is not considered to be threatened in its habitat early in the twenty first century (www.redlist.sanbi.org; www.plantzafrica.com).