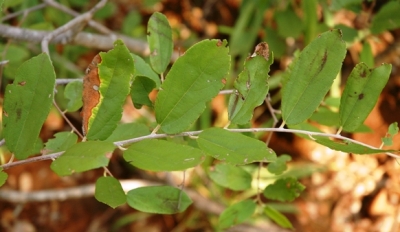 Previous
Image 1 of 37
Next

Grewia bicolor var. bicolor, commonly the white-leaved raisin or in Afrikaans witblaarrosyntjie, is usually a many-stemmed shrub of 2 to 4 m, occasionally a tree of up to 7 m (SA Tree List No. 458).

The bark becomes fissured on old plants. The bicolor specific name refers to the leaves that are dark green above and silvery white below.

The yellow flowers of about 1,5 cm in diameter often cover the plant in spectacular fashion in spring and early summer. The central mass of stamens is characteristic of the species. The fruits are single or bi-lobed.

The variety, the only one of G. bicolor found in South Africa, occurs only in the in the far northeastern part of South Africa, in KwaZulu-Natal and all the provinces north of the Vaal River. G. bicolor is widely distributed across Africa and in the Middle East. The photo was taken near Burgersfort.

The habitat is mostly deciduous woodland and bushveld on sandy flats and rocky slopes. The plants are often seen among mopane and at termite mounds, or form part of the shrub layer under trees. The variety is not considered to be threatened in its habitat early in the twenty first century (Coates Palgrave 2002; www.worldagroforestrycentre.org; http://redlist.sanbi.org).