Home » GENERA D-F » Eulophia » Eulophia cooperi flowers
Back to Category Overview
Total images in all categories: 10,355
Total number of hits on all images: 5,058,746 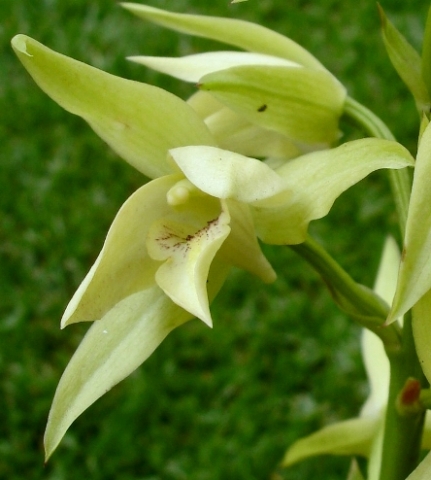 The inflorescence of Eulophia cooperi is a lax spike consisting of 8 to 20 flowers. The tentatively or partly opening flowers are mainly pale yellow, a greenish tint added on the outside surfaces of the sepals.

The sepals are lanceolate, tapering to acutely pointed tips. The pair of lateral petals inside them are broader, attenuating to short, pointed tips. The lip has three lobes, the middle one large, the lateral ones ascending near its base, flanking the column. Four to seven fleshy ridges occur on the back parts of this central lobe of the lip. A few papillae may extend beyond the ridges towards the lip’s tip. There are also purple-red veins showing in dotted lines on the base of the central lobe of the lip, as well as on the lateral ones.

Two blunt protrusions from the flower are visible in the photo: inside the flower the column housing both anther and stigma is erect, curving forward; below the flower the spur points downwards from the back end of the lip.

A pointed green bract envelops the base of the ovary on each flower stalk. Flowers are scented, sometimes strongly; one of the earlier names of the plant was E. fragrans.

Flowering happens in the latter part of spring (Lowrey and Wright, 1987; http://wildorchids.co.za).