Home » GENERA D-F » Eulophia » Eulophia coddii
Back to Category Overview
Total images in all categories: 10,366
Total number of hits on all images: 5,071,871 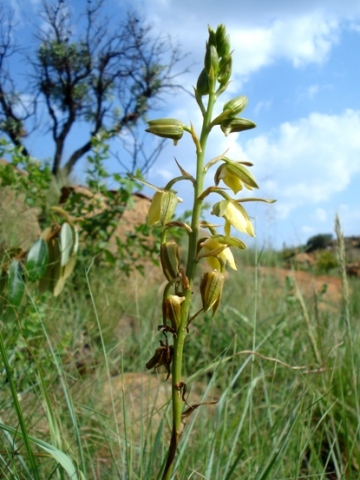 Previous
Image 7 of 76
Next

Eulophia coddii is a terrestrial orchid, a small perennial. The leaves are narrow and grass-like, present at bloomtime.

This species is a South African endemic, occurring in a few isolated sites, some in southern Gauteng near the eastern Magaliesberg and the Suikerbosrand, others in Limpopo in the Waterberg and near Thabazimbi.

The habitat is sandy grassland and bushveld on steep slopes at altitudes between 1200 m and 1800 m, often among quartzite rocks. The lip of the flower may be shaped differently in populations from the different regions.

The species is considered to be vulnerable in its habitat, particularly the Gauteng part being threatened by urban expansion, agriculture and plant collectors. Fortunately, one of the known sites lies within the Suikerbosrand Nature Reserve (iSpot; www.orchidspecies.com; www.redlist.sanbi.org).