Home » GENERA D-F » Eulophia » Eulophia angolensis
Back to Category Overview
Total images in all categories: 10,349
Total number of hits on all images: 5,049,310 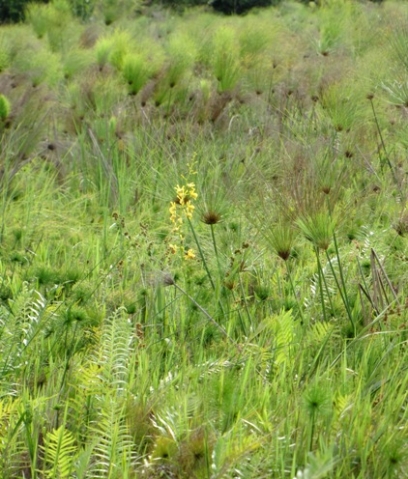 Previous
Image 1 of 76
Next

Eulophia angolensis, the vlei orchid, is a robust perennial that grows to heights up to 2 m. Leaves and flowers are grown annually from the fleshy, cylindrical rhizomes, the plant’s perennial, underground component. It bears two to four stiffly pleated, erect leaves, linear to lanceolate in shape, becoming 90 cm long and 5 cm wide.

The species distribution is the eastern parts of the Eastern Cape coast, through coastal KwaZulu-Natal, inland in Mpumalanga and Limpopo, as well as widely in tropical Africa.

The habitat is marshy grassland, swampy forest and streambanks where the plant is dormant in the dry winter season. The species is not considered to be threatened in its habitat early in the twenty first century (Pooley, 1998; Manning, 2009; www.zimbabweflora.co.zw; www.redlist.sanbi.org).