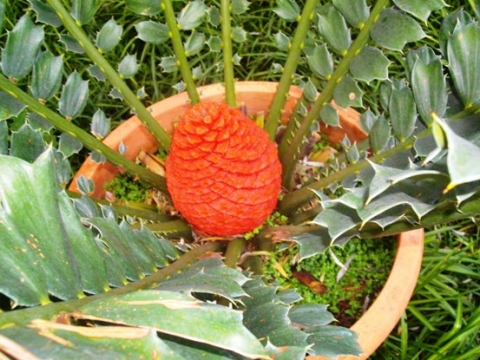 Encephalartos ferox, the Tongaland cycad, is found in nature along the KwaZulu-Natal coast among the dune scrub and forest margins. It also grows to the north along the Mozambican coast. This area has high rainfall and no frost.

The plant is one of the smaller cycads, usually growing single-stemmed. The stem is mostly underground and reaches 1 m in length and 35 cm in diameter, but may sometimes be partly above ground. Occasional branching from suckers growing around the main stem does occur. The arching and spirally arranged leaves grow to lengths of one to two metres.

Leaflets have lobed teeth on both margins. They are more widely spaced close to the leaf base, while crowded and overlapping higher up. Young leaves are often coppery in colour and finely hairy, but lose their hairs early, turning dark green as they mature.

The bright orange to red male and female cones of E. ferox grow on separate plants as do the cones of all cycads. They differ in size and shape, allowing for determining the gender of a particular plant. The female cone in picture is ovoid, thicker and shorter than the male one. It was photographed in April in the Botanical Garden at the Potchefstroom Campus of the North-West University (www.plantzafrica.com; Wikipedia).