Home » GENERA D-F » Encephalartos » Encephalartos caffer after a dry season
Back to Category Overview
Total images in all categories: 8,984
Total number of hits on all images: 3,986,399

Encephalartos caffer after a dry season 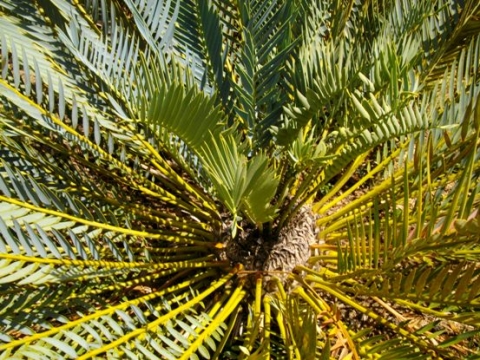 This Encephalartos caffer, in Afrikaans the boesmansbroodboom (San bread tree), growing in Kirstenbosch lacks recent growth at the end of the summer season, although a group of later grown leaves stand isolated in the centre of its crown. These older leaves are low in hairiness, the leaf rachis and petiole colour yellower than usually seen.

E. caffer bears single, greenish yellow cones on both male and female plants; only when a cone is present the plant’s sex will be disclosed to the casual observer.

This species is considered near threatened in its habitat early in the twenty first century. Apart from the main Eastern Cape distribution a small subpopulation is found in the Oribi Gorge Nature Reserve (Wikipedia; Hugo, 2014; http://www.iucnredlist.org).