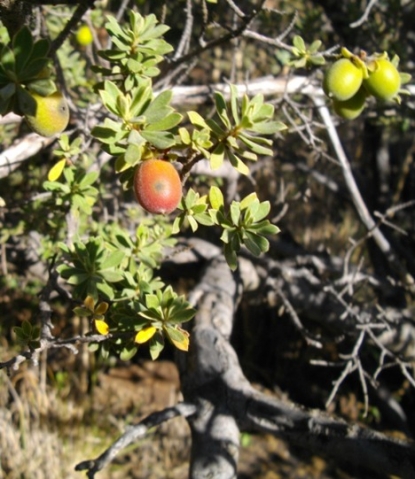 Some form of Diospyros lycioides grows just about everywhere in South Africa, barring parts of the Western Cape and the Northern Cape. The biological differentiation into at least four subspecies over so many centuries in such a large distribution area with its wide range of climatic challenges, has brought much to marvel at.

People also master survival challenges by using what they can find in the environment to serve their needs. In this way it was not only learnt that the fruits of the bluebush are good to eat, but that the roots can be chewed, causing them to be frayed into a functional toothbrush. This practice used to turn mouths of some early tooth-cleaning South African tribes red after meals from the juices exuded by the bluebush roots. One may wonder whether such cosmetic effects were wanted or sought, a fore-runner of lipstick?

The sturdy stems of the eastern bluebush, as this subspecies is sometimes called, are pale coloured in the photo. The main stems are smooth, the bark ash-grey. Young branches are hairy and light brown. The effects of insects using bluebush fruit as food, also for their hatching offspring from within the fruit, can be seen on some of the fruits in the picture (Coates Palgrave, 2002).