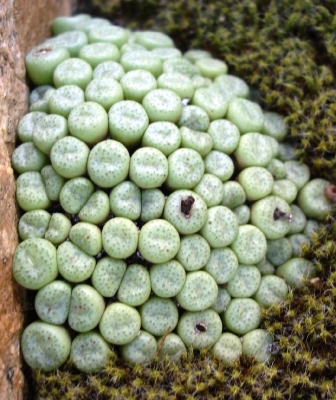 Conophytum truncatum subsp. truncatum, commonly known as dumplings, or in Afrikaans toontjies (little toes), is a clump-forming dwarf succulent. It displays a small mound or flat upper area of nearly circular leaf-pair tops above-ground. In summer the leaves become white and papery on top, the old leaf skin remaining as protective cover until the young growth bursts free in the centre. In winter the green leaves display scattered dark green or purple-red spots.

The short slit that bisects the central part of each rounded leaf-top, sometimes hardly a slit but a hole, is all that represents the division between the two fused leaves of each pair. From this slit an erect, many-petalled white, pink or yellow flower emerges in winter. The flower reaches 1,5 cm in length.

This subspecies grows in the eastern parts of the Little Karoo, as far east as Steytlerville. Another subspecies, C. truncatum subsp. viridicatum is found in the west, as far as Montagu.

Conophytum or cone plant, derived from the Latin conus meaning cone and the Greek phytum meaning plant, denotes a genus of small leaf succulents in the family Aizoaceae, previously the Mesembryanthemaceae (www.plantzafrica.com).