Home » GENERA C » Conophytum » Conophytum subfenestratum
Back to Category Overview
Total images in all categories: 11,413
Total number of hits on all images: 6,190,487 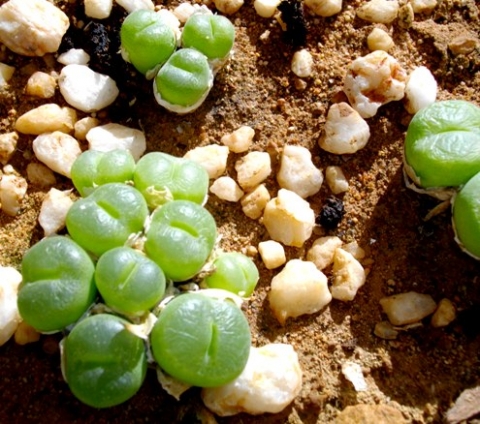 Conophytum subfenestratum is a dwarf leaf succulent growing one or a small clump of soft leaf bodies at ground level.

The lush leaf bodies in picture are pale green on the sides, bluish from translucence in the “window” on top. This almost window brought the species the specific name of subfenestratum (Latin), meaning nearly a window. When olive brown in the dry or rest season, the leaf bodies tend to immerse themselves partly in the ground for shelter, exposing only their tops for sunlight to enter. A leaf body bulges when thriving or ebbs to a flat top in accordance with seasonal surges in succulence. It becomes about 2,5 cm in diameter.

The short central slit on the top is where the largely fused leaf pair will present the new leaf body or flower before it succumbs and is replaced. Some pale debris of the previous leaf body, papery and dry, is still visible around the base of some. These old skins linger over the new growth, serving as shields for some time against (some of) the elements, particularly the sun.

The bright pink, occasionally white, nearly red to pale lilac flowers are mostly white near the base of the petals around the cluster of yellow to dull orange anthers of the flower centre. Flower grows solitary, appearing in late summer or autumn. The flowers are usually scented.

The species is endemic to the Western Cape where it grows in the Knersvlakte towards Namaqualand. The small clumps of leaf bodies are hard to spot when not in flower, hiding on exposed ground among the quartzite pebbles. The species is not considered to be threatened in its habitat early in the twenty first century (http://llifle.com; www.redlist.sanbi.org).