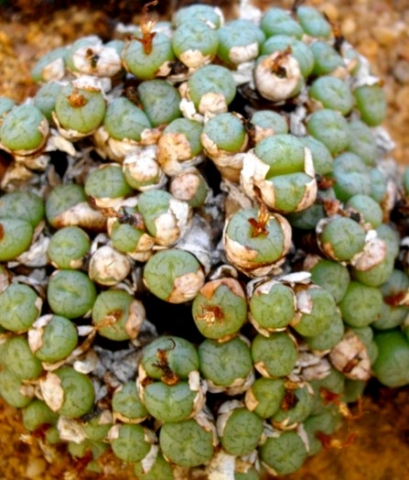 The round-topped leaf body has an inverted cone-shape bulging at the top from the succulence under the skin. The tiny slit or fissure in the centre of the leaf body is where a new leaf or flower emerges in season. This mouth is often accentuated by a dark line on the pale grey-green surface. Leaf surfaces are sometimes purple-green. They are sparsely covered in dark spots and more random lines. Leaf bodies are sometimes reddish on their sides. They become about 8 mm tall and 5 mm in diameter.

The flowers appearing at night have petals in some shade of purple. They spread slightly wider than 1 cm. Flowering happens in mid-autumn. The leaf bodies resemble those of C. joubertii, but that plant has white flowers.

This plant is a Western Cape endemic, growing in the Little Karoo and northeast of the Swartberg Mountains. The habitat is sandstone and quartzite outcrops on slopes covered in karoid scrub. The subspecies is not considered to be threatened in its habitat early in the twenty first century, unlike the other recognised subspecies, subsp. edwardii that is rare (Vlok and Schutte-Vlok, 2010; www.llifle.com; www.redlist.sanbi.org).