Home » GENERA C » Conophytum » Conophytum pageae flowers and leaves
Back to Category Overview
Total images in all categories: 11,506
Total number of hits on all images: 6,499,236 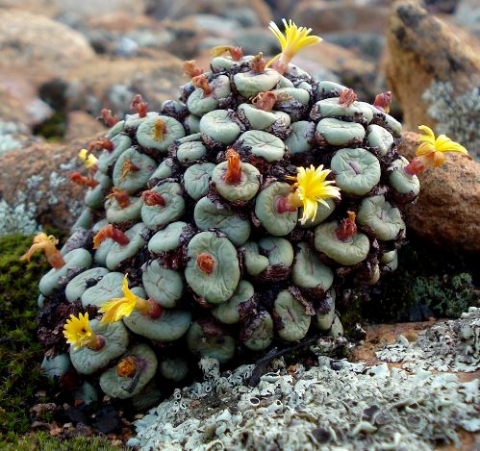 The fragrant flowers of Conophytum pageae are yellow, sometimes nearly white or rarely pink. Flowers grow solitary from the slits in the tops of the leaf-bodies. The flowers open late in the day, are mostly open after dark. The short, oblong petals spread above a pointed, pinkish to brown calyx. Flowering happens in autumn.

The pale green, hairless leaf-bodies are 1,5 cm in diameter, rarely up to double that and flat to bulging on top with a short, central fissure between the pair of fused leaves. The succulent, cylindrical or inverted cone-shapes of the leaf-bodies retain the old skin, first over and later in autumn around the new, seasonally grown, paired body. The red sometimes seen on the fissures (and the sides) has been referred to as lipstick.

Summer dormancy is associated with moisture loss and the leaf wrinkling as in the photo. After winter rain the bodies bulge (Grenier, 2019; Frandsen, 2017; iNaturalist).