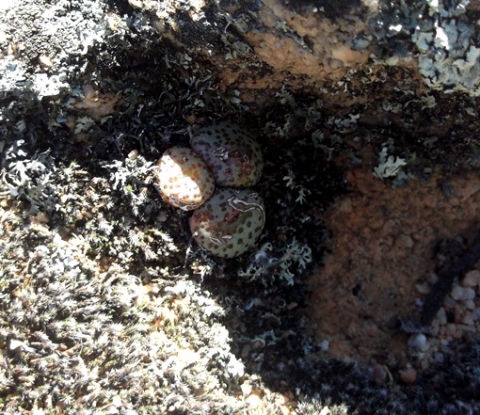 C. obcordellum subsp. obcordellum seen here has also developed some varieties of variable standing. The crowded mat or mound of leaf pairs that constitutes the plant becomes only up to 3 cm tall.

Solitary creamy white or pale pink flowers appear in autumn from the fissure in the top of the leaf pair. The corolla comprising numerous petals has a slender tube extending above the usually pinkish lobes of the calyx. The fragrant flowers open at night. The tiny fruit capsule comprises four to six locules where small, smooth seeds are formed for dispersal into the chance game of life.

The species is distributed in the northwest of the Western Cape and slightly into the Northern Cape, mostly on the Bokkeveld Escarpment, the Gifberg and Cederberg southwards to Ceres.

The habitat is arid fynbos where the plants may be anchored in mossy crevices or among lichen in sandstone and quartzite rocks. The subspecies is not considered to be threatened in its habitat early in the twenty first century (Van Jaarsveld, et al, 2006; Frandsen, 2017; iNaturalist; http://pza.sanbi.org; http://redlist.sanbi.org).