Home » GENERA C » Conophytum » Conophytum obcordellum calyces have it over corollas
Back to Category Overview
Total images in all categories: 12,086
Total number of hits on all images: 7,381,196

Conophytum obcordellum calyces have it over corollas 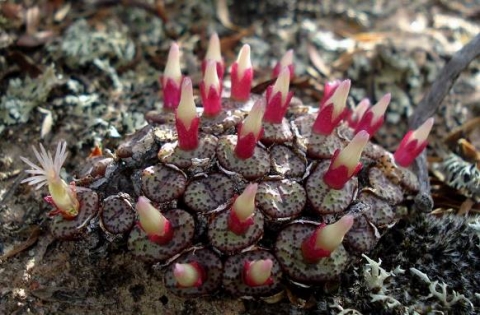 Conophytum obcordellum is a clump-forming leaf succulent growing fused leaf-pairs in the shape of inverted cones. The leaf-pairs have short apical slits in the centre from which new leaves or flowers appear in season. The greenish white leaf-pair tops in picture are pale greenish white with dark dots in semi-random row patterns or scattered.

The dense mat of new leaves ringed by old skins is flowering nearly white, the pointed calyces cylindrical and pink-purple. Some C. obcordellum flowers have pale pink or pale yellow petals. The rocket-nose buds soon to launch by spreading petals are likely to be visited instead of departing into the sky.

There are at least five subspecies of this Conophytum, maybe seven and even a variety, more or less known and recognised or not. Several cultivar-type names have been conferred, a trend that may lack stability.

The species overall is found in the north of the Western Cape and the southwest of the Northern Cape where plants live with moderate to low winter rain. Some subspecies are not threatened, others are not yet evaluated or rare early in the twenty first century (Grenier, 2019; Frandsen, 2017; http://redlist.sanbi.org).