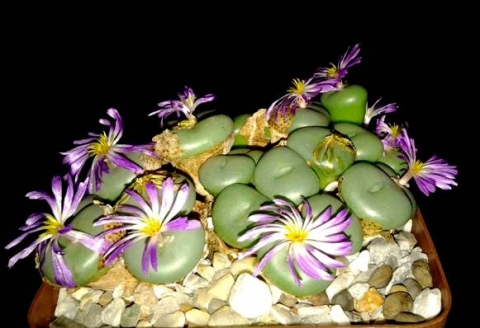 Conophytum minutum var. pearsonii is a tufted dwarf succulent forming a small mat or dome on the ground.

Each leaf-body has the form of an inverted cone, flat-topped or slightly convex above with overhanging margin and a short slit in the centre where a flower or the next leaf-body may appear. The leaf colour is green or brownish, with or without surface dots.

The short-petalled, pink or magenta flowers have long corolla tubes and are sometimes white in the centre around the yellow anthers.

The C. minutum species distribution in southern Namaqualand is coastal to around Vanrhynsdorp. Var. pearsonii occurs in a small part of this area near the border between the Northern and the Western Cape.

The habitat is succulent Karoo on flats and ridges, in full sun or shaded, among shale, gneiss, quartzite or calcrete. The species is not considered to be threatened in its habitat early in the twenty first century. The status of the variety has not yet been assessed (Frandsen, 2017; iNaturalist; http://redlist.sanbi.org).