Home » GENERA C » Conophytum » Conophytum meyeri
Back to Category Overview
Total images in all categories: 12,058
Total number of hits on all images: 7,353,460 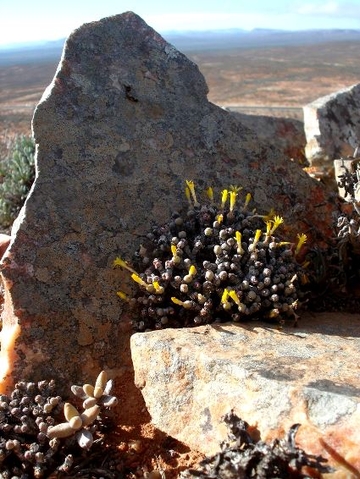 The globose leaf-bodies, sometimes slightly keeled in their upper parts, are dull green, blue-green to yellow-green and sometimes slightly two-lobed. The skins may be velvety and unmarked but dark green dots are usually present, scattered sparsely. The fissure on the leaf-body top is sometimes ringed darker or pinkish red, while nearly white in the centre from papillae. The leaf-bodies become 5 cm long, 1,5 cm wide and 1 cm thick.

The unscented, solitary flowers are small and yellow, the perianth tube pale, prominent in a funnel-shape below the spreading petals. The flowers open during the early parts of the day. Flowering happens in autumn.

The species distribution is in the northwest of the Northern Cape from Kleinzee to the Richtersveld hills.

The habitat is arid, rocky terrain, succulent Karoo on clayey soil from quartzite or gneiss. The species is not considered to be threatened in its habitat early in the twenty first century (Grenier, 2019; Frandsen, 2017; iNaturalist; http://www.llifle.com; https://worldofsucculents.com; http://redlist.sanbi.org).