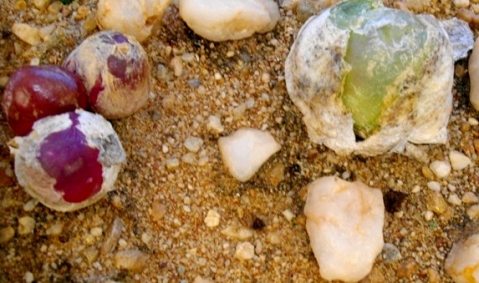 Conophytum maughanii subsp. latum is a tiny leaf succulent. The sub-spherical leaf body has a small slit at its top where new leaves or flowers emerge in season. One of the window succulents, light enters the leaf body for photosynthesis in cells against the insides of the walls, the process decreasing when the green colour goes in summer, bringing the plant to rest.

The plants are said to grow solitary, so the close proximity of some leaf-bodies to each other here raises the question of occasional branching. Leaf bodies become about 2 cm long and 1,4 cm wide; and wider than tall.

The wine-red colour and some wrinkling is typical summer fashion, the dry remains of last year’s leaf skin draped randomly around the fleshy body in a style only making sense in select Conophytum circles. Similar to styles in some other fashionista worlds though, the onset of seasonal changes, here from translucent green to wine-red, leaves some latitude for disagreement, or possibly scandal when weather conditions aren’t prohibitive.

The flowers don't do things for daytime flaunting of talents: The pale pink flowers appear at night, maybe of interest to some kinds of moths. Blooming happens from mid-spring to early summer.

The subspecies distribution is small, the plant being endemic to a part of the Richtersveld north of Steinkopf from Umdaus to Eksteenfontein. The habitat is the arid, pebbly quartz plains bearing succulent Karoo type vegetation in this remote region. The plant embeds itself in the ground, withdrawing more deeply during the hot and dry summer. The species is not considered to be threatened in its habitat early in the twenty first century.