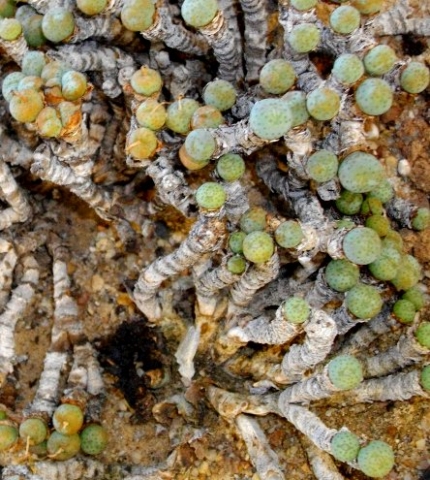 Conophytum jucundum subsp. jucundum is a dwarf leaf succulent that forms a dense to lax, circular clump. Each convex, round-topped succulent leaf body is divided by a short slit in its centre.

Pale grey stems looking gnarled and some forking, up to 5 cm long, are visible below the green tops. Old leaf debris tends to collect in circular ridges around these stems. The stems topped by leaf-bodies lengthen as new leaves replace the old ones in winter growth. Every new stem-tip leaf is temporarily protected under the dry skin of the last old leaf; a useful shield should there not be convenient shrub shade close by.

The subspecies distribution is in a part of the Richtersveld in the Northern Cape and over the Gariep River in southern Namibia. The habitat is arid desert, semi-desert and succulent Karoo vegetation among quartz and gneiss outcrops. The species is not considered to be threatened in its habitat early in the twenty first century.