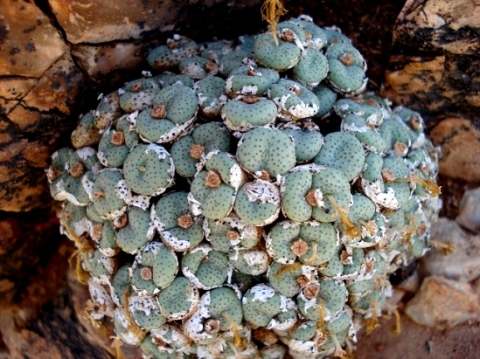 The sizable clump of leaf bodies of Conophytum jucundum subsp. fragile seen here forms a dome structure in the shade of a rock in the Richtersveld National Park, close to the Gariep. The plant's natural distribution lies in the west of the Richtersveld, the north-western corner of South Africa.

The pale, grey-green colouring of the leaf tops are covered in small, scattered, dark green spots, although the spots may be less conspicuous on some specimens. The leaf bodies in picture display much variation in shape. Around the bulging leaf cones the receding whitish remains of the previous leaf skin, also still bearing the spots, are visible.

The withering remains of recent autumn flowers can detected on some leaves; some fruit capsules are also present. It is not certain whether these are from the previous season. Probably not, as they appear to be still closed and functional (Smith, et al, 1998; iSpot).