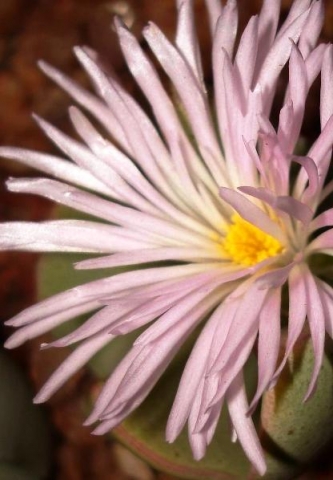 This low-growing member of the vygie, mesemb or botanically the Aizoaceae family, is found in a tiny distribution near a place called Klipbok in the Richtersveld, the northwesterly extreme of South Africa.

The bluish-green leaves become from 2 cm to 4 cm long. They are triangular in cross-section, thickly succulent, growing in opposite pairs. The pink petals tend to white near the base around the stamen-covered central disc. Flower size is about 2,5 cm to 3 cm in diameter. The flowers don't close at night.

But all these names live in the world of a small proportion of humans, and only there. In the plant world the issue is water, sun, clean air, nutrients, those that eat them and little else. Every plant's mission is to flower and produce viable seed for another, always more prolific generation. No living species (other than humans) has to be taught this.

No plants or animals seem to deviate from this purpose, for if they do, they die without offspring, maybe remembered in history or fossils. People have brains that figure out reasonably well how to avoid premature death, so they introduce conventions for safe living.

Plants only have stoical fortitude in a vegetative sense. It comes in handy when life is confined to one spot and no weaponry available beyond the body itself (Williamson, 2010; Hartmann, 2002, The Illustrated Handbook of Succulent Plants).