Home » GENERA C » Combretum » Combretum vendae leaves
Back to Category Overview
Total images in all categories: 12,068
Total number of hits on all images: 7,360,624 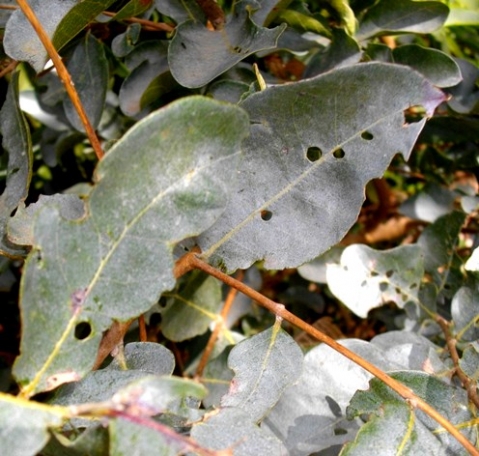 The opposite leaves of Combretum vendae grow on short petioles. They are broadly elliptic or obovate with rounded apex and small protruding tip or mucro, the leaf tip sometimes twisted. The leaf base is rounded to shallowly lobed. The leaf margins are entire and sometimes wavy.

The midrib is raised on both surfaces, the five to eight pairs of lateral veins also, but particularly on the lower surface. Lateral veins ascend towards the margins, not reaching them as they end by looping into the next upper vein.

Leaf colour is grey-green to medium green above, greyer below with a velvety covering or hairless. The leaves below the inflorescences are pale greenish yellow. Leaf dimensions are 4 cm to 8 cm by 2,5 cm to 4,5 cm.

Two varieties are recognised: var. glabratum, more hairless with a glutinous layer upon the leaves occurring towards the Blouberg in the west and var. vendae, which is hairier found in the east of the distribution between Gombani and Thengwe (Coates Palgrave, 2002; Van Wyk and Van Wyk, 1997).