Home » GENERA C » Combretum » Combretum mossambicense
Back to Category Overview
Total images in all categories: 11,912
Total number of hits on all images: 7,163,140 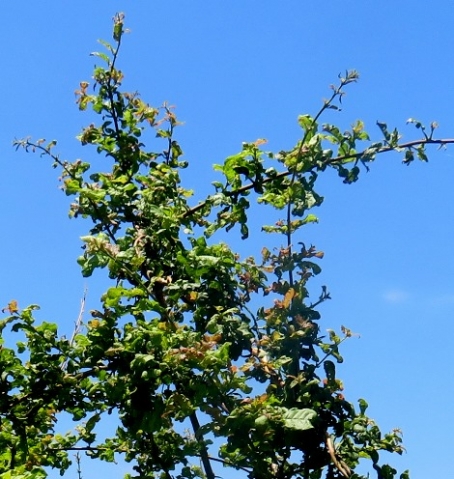 Combretum mossambicense, commonly known as the knobbly climbing bushwillow, is a scandent, often multi-stemmed shrub that spreads, reaching heights from 2 m to 3 m. Small and single-stemmed trees of up to 5 m do occur (SA Tree List No. 545.1). This attractive plant grows easily, also in poor soil.

The upper branches may be long and twining, escaping above the shrubby mass of the dense bush like haphazard antennas where there are no supports for a climb.

The species distribution is in the northeast of South Africa, in the Limpopo and Mpumalanga lowveld, less common in parts of North West and KwaZulu-Natal. It also grows widespread from northern Namibia to Mozambique and further in tropical Africa.

The habitat is hot, dry woodland, also riverine bush fringes and Combretum-Commiphora scrub called jessebush. The plants favour lower altitudes in its distribution. The species is not considered to be threatened in its habitat early in the twenty first century.

There is a practice among indigenous women in northern Namibia of putting a small twig of this plant in the water carried in a container on their heads for preventing the water from spilling.

Women of some indigenous tribes experiencing fertility problems carry or used to carry sacks of C. mossambicense twigs on their backs like a baby in the hope of facilitating conception (Carr, 1988; Coates Palgrave, 2002; Schmidt, et al, 2002; Mannheimer and Curtis, (Eds.), 2009; iSpot; http://redlist.sanbi.org).