Home » GENERA C » Combretum » Combretum mossambicense leaves
Back to Category Overview
Total images in all categories: 12,068
Total number of hits on all images: 7,360,641 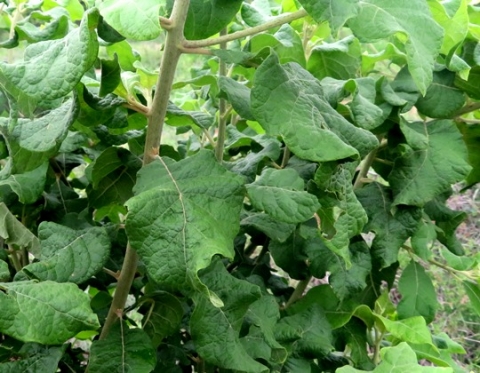 The simple leaves of Combretum mossambicense are decussate, i.e. growing in opposite pairs at right angles to the previous pair. This plant, however, may also grow sub-opposite leaves or miss a leaf for branches to appear as though the leaves are alternate, sometimes all of these on the same plant.

The petiole or leaf stalk may be 1 cm long, sometimes less than half that. When still a petiole it is pale and covered in downy hair. But this petiole outlives the leaf blade, acquiring a second function: when the leaf falls it persists as a rigid, sometimes curved spine. The spine may even increase in length to over 3 cm or remain only a small knob, hence the knobbly bushwillow common name.

Leaf shape is broadly elliptic, obovate or nearly circular with or without a small, acutely pointed, protruding tip that may be twisted. The leaf base is square to slightly lobed. The margins are entire and wavy, slightly rolled under and finely hairy. Mature leaves are hairless and dark green above, pale and densely downy below, particularly along their veins.

There are silvery domatia on the lower surfaces of the leaf where the midrib meets the opposite pairs of ascending, lateral veins. Six to sixteen lateral veins may be present on each side of the midrib. The midrib and veins are recessed on the upper surface thus prominent below, as are the larger net-veins, giving the leaf a quilted appearance.