Home » GENERA C » Combretum » Combretum molle leaves
Back to Category Overview
Total images in all categories: 11,635
Total number of hits on all images: 6,753,125 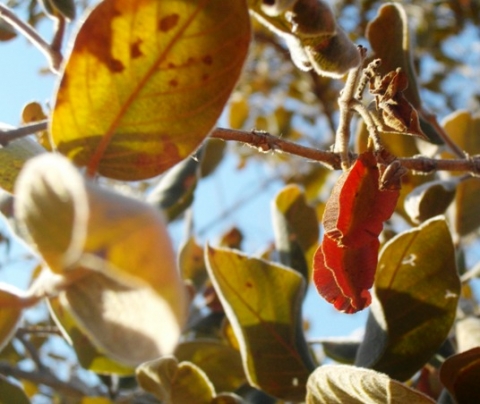 Combretum molle leaves are deciduous and variable. They are sometimes narrowly elliptic, in other forms broadly ovate or elliptic as in this picture. They may also be nearly round.

New leaves may display a pinkish apricot colour before becoming mid-green and parchment-like in summer. There are six to twelve pairs of lateral veins on a leaf as well as fine net-veining, all indented above and prominent below. The apex of the leaf tapers to a hair-like tip, otherwise rounded; the base is shallowly lobed or rounded. The petiole is short and stout.

The small young branchlets are hairy. The main stem is sometimes dark, sometimes biscuit brown, rough and fissured. Low down on the trunk black patches, evidence of survived veld fires may sometimes be observed.

The leaves shown here have lived through a long season already, wear and tear in evidence. It is now winter (June) in the Pilanesberg. The seeds are fully formed and the leaves are probably about nine to ten months old, soon to fall and replaced by new growth (Carr, 1988; Schmidt, et al, 2002; Coates Palgrave, 2002; Tree Society of Southern Africa, 1974).