Home » GENERA C » Combretum » Combretum moggii
Back to Category Overview
Total images in all categories: 12,068
Total number of hits on all images: 7,360,701 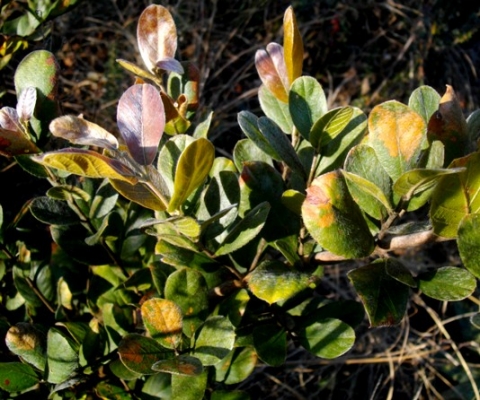 Combretum moggii, in Afrikaans known as the rotsboswilg (rock bushwillow), is usually a shrub, sometimes a small, often multi-stemmed tree growing to heights of 5 m and spreading to 7 m (SA Tree List No. 542). The bark is grey and smooth, sometimes pitted into rounded hollows low down and flaking, sometimes transversely wrinkled.

The leaves of C. moggii may grow alternate or in whorls on coppice shoots, but are generally opposite. The leaf shape is oblong-elliptic to obovate, sometimes narrower than those in picture. Leaf margins are entire, the tip rounded, tapering or notched, sometimes with a tiny spine-like protrusion. The base of the leaf tapers, sometimes square, but briefly so. The hairy, even scaly velvety to silvery leaf surface is typical, also some red-brown leaf discoloration. The leaf midrib and pairs of ascending lateral veins may be recessed on the upper surface while usually prominent below.

The pleasantly scented flowers grow in short, single or paired spikes at stem tips or from leaf axils in mid-spring. The flowers that are greenish yellow, may appear in dense masses among the leaves. The spoon-shaped petals protrude about 1 mm above the triangular sepals that are 1 mm long. Yellow anthers protrude from the corolla on yellow filaments.

The fruit, a samara, has three to seven slightly hairy wings, commonly four. It is biscuit to cinnamon-coloured, drying to a pale buff.

The tree grows on north-facing hills and mountains of Gauteng and Limpopo among quartzite rocks. It occurs in sour soils at altitudes of 1300 m to 1500 m (Carr, 1988; Coates Palgrave, 2002).