Home » GENERA C » Combretum » Combretum microphyllum, the vlamklimop
Back to Category Overview
Total images in all categories: 12,068
Total number of hits on all images: 7,360,705 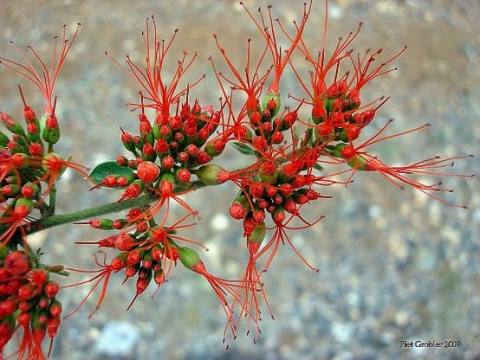 Combretum microphyllum flowers grow in dense, flattish panicles from nodes of last year’s leaf axils, spaced along the upper metre or so of the stems. The panicles of about 15 unscented flowers are opposite each other as the leaves grow, roughly in the plane of the branch. Small leaves or bracts appear in the panicles among the flowers.

The stalked flower has a cup-shaped green calyx, its scarlet petals small, only protruding 2 mm above the calyx. The conspicuous, long filaments are scarlet, the tiny anthers at their tips brick-red or brown, only 0,5 mm long. The crimson style extends about 7 mm above the calyx.

The style becomes exserted before the calyx parts fully, allowing the bud to open. In picture the styles can be seen, solitary upon the half-open flowers. The bunch of stamens appear only later in the open flowers, becoming well taller than the style.

The inflorescences appear annually with the new leaves of this deciduous liane or climbing shrub. Flowering is thus common early in spring, occasionally beginning late in winter and continuing late in spring (Carr, 1988; Coates Palgrave, 2002).