Home » GENERA C » Combretum » Combretum microphyllum in flower
Back to Category Overview
Total images in all categories: 11,779
Total number of hits on all images: 6,931,938 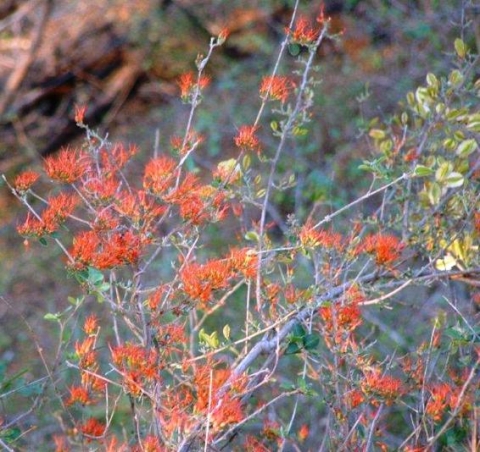 Combretum microphyllum, the flame climbing bushwillow or vlamklimop in Afrikaans, is listed as a South African tree species (No. 545). It is usually only a vigorous climber, sometimes a scrambling shrub, rarely a small tree of several metres, depending on the proportions of the host trees that aide it.

The vlamklimop grows a multitude of spiny branches and develops flaking, rough bark on the larger stems. Spines occur in pairs or singly, recurving slightly. Stems may coil around each other to form a right-hand helix. The leaves according to the name are small. They are ovate, oblong, elliptic or round. The leaf texture is leathery, glossy above and hairy when young. There are five or six pairs of conspicuous lateral veins from the midrib. Hair-tuft domatia are found on the pale green lower surface. The margins are entire, wavy and tapering at the tip, rounded or lobed at the base.

The flowers are crimson red, mainly thanks to the showy stamens that dominate the flower structure. Blooms may be spread along many of the curved upper stems on these plants, bringing a striking splash of contrasting colour to the verdant spring surroundings. The fruit is four-winged, occasionally five-winged, greenish-pink or red. It dries to a straw colour already by midsummer when its annual show is over.

This is a tropical African species, only a small part of its distribution being in Limpopo, Mpumalanga and KwaZulu-Natal in South Africa. The habitat is hot, dry woodland or riverine forest at low elevations. The species is not considered to be threatened in its habitat early in the twenty first century (Carr, 1988; Coates Palgrave, 2002; http://redlist.sanbi.org).