Home » GENERA C » Combretum » Combretum imberbe
Back to Category Overview
Total images in all categories: 11,793
Total number of hits on all images: 6,942,116 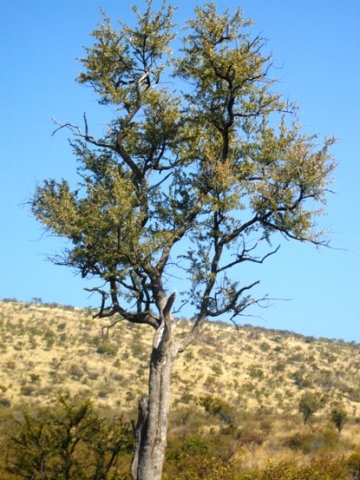 The leadwood or hardekool (Afrikaans, meaning hard coal) tree as Combretum imberbe is commonly known must count among the most impressive savannah trees of southern Africa (SA Tree List No. 539). The CSIR carbon dated one specimen as being a little over 1000 years old (Carr, 1988).

The single, broad stem may measure up to 1,5 m in diameter. Branching on old trees typically commences high above the ground, the crown often sparse.

The termite-resistant stems have been used in the past as fence posts, railway sleepers and mine props. The dark brown heartwood is very hard and heavy, the close-grained texture making it hard to work. Cross-fibres usually cause the pith to crack. Before metal implements were readily available, blades for hoes were fashioned from leadwood.

The hard coal name suggests the wood as good for making camp fires… a practice that will hopefully be limited in future, given the disappearing world of leadwood trees. The ash, rich in lime, has served as toothpaste and whitewash for houses (Coates Palgrave, 2002; Schmidt, et al, 2002; Mannheimer and Curtis, (Eds.), 2009; Van Wyk and Van Wyk, 1997; Pooley, 1993).