Home » GENERA B-C » Combretum » Combretum hereroense
Back to Category Overview
Total images in all categories: 9,900
Total number of hits on all images: 4,602,018 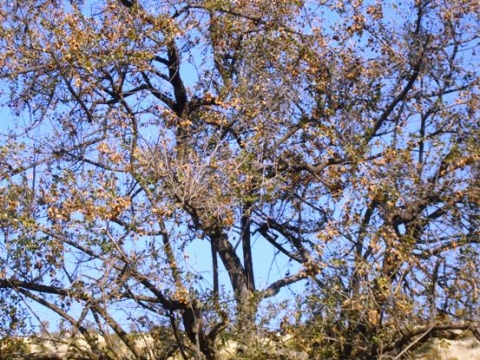 The russet bushwillow as it is known in South African bushveld is a variable species with at least three recognised subspecies. Only the type subspecies, Combretum hereroense subsp. hereroense, grows in South Africa. The other two are from African countries to the north.

The habitat of the South African subspecies is dense or sparse savannah, the trees often growing in sandy soil. The straggling growth habit is evident in this photo taken in the Pilanesberg. The tree has been described as tardily deciduous, theh old leaves lingering among the new ones in spring.

Russet, the colour of the fruit in the common name, has an apt definition fitting these fruit: a dark brown colour with a reddish orange tinge (Carr, 1988; Wikipedia).