Home » GENERA C » Combretum » Combretum hereroense fruits at the De Hoop Dam
Back to Category Overview
Total images in all categories: 11,793
Total number of hits on all images: 6,942,103 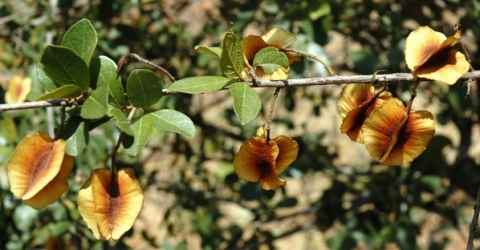 The leaves of Combretum hereroense grow mainly on short lateral twigs. The leaf form varies from broadly elliptic or obovate to almost circular. It has a rounded or tapering base and a square, rounded or notched apex. Hairiness varies among the forms of the species, sometimes giving the tree a brown appearance from dense hairs especially on the lower leaf surfaces. The pairs of lateral leaf veins vary between three and six. The veins are indented on the upper surface, prominent below.

The ripe fruit has colour variations from dark red-brown at the base to ginger on the edges. There are dark red-brown scales on the body of the fruit. The fruit varies in size from about 0,5 cm to 1 cm in diameter but the typical size is often about halfway between those extremes. The shape of the four wings is elliptic to almost circular (Carr, 1988; Coates Palgrave, 2002).