Home » GENERA C » Combretum » Combretum collinum in the Kruger National Park in January
Back to Category Overview
Total images in all categories: 12,086
Total number of hits on all images: 7,380,825

Combretum collinum in the Kruger National Park in January 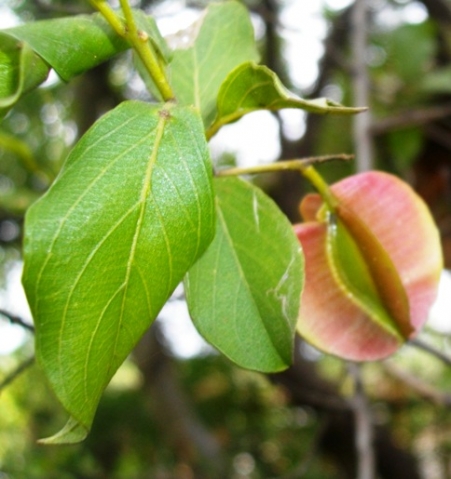 Previous
Image 8 of 50
Next

Combretum collinum has four subspecies south of the Zambezi, three of them occurring in the Kruger National Park. The validity of separating them into subspecies rather than lumping them together as diverse forms of the same species, is still in doubt.

This plant has elliptic hairless leaves with yellowish lateral veins, insignificant net-veining, whitish dots on the fresh green leaf surfaces and hairless green fruit with pinkish, rounded wings. The fruit appears too round and the wrong colour to be C. collinum subsp. gazense and the leaves not grey or hairy. The fruit is not as red-brown or as hairy as subsp. suluense is supposed to be, although the leaves might match. The fruit is not as dark, the leaves not as dark green above or as white below as subsp. taborense. Those are the options on offer in perusal of the available material.

When one photo is all to go on, it may be impossible to reach a definitive conclusion on such a question. The doubt might start whether this is C. collinum at all! The picture is still worth a look, a moment in a series of ongoing transformation of a species. Important? It depends on your interests.

The succession of generations bring different challenges, of life as eternal becoming what has never been, although there are patterns. The changes during one lifetime are rarely significant in the long term over many generations, unless it brought an end from insurmoutable problems. Usually the trends are too small to pick up during just one life. But something is happening across generations all the time, the trends often irreversible. Looking backward brings ideas about what can be expected on the way forward. Or one could get the wrong idea.

Reflecting on what time does to nature is fascinating. Understanding is incremental, about the big picture, the topic at hand and about self. The search for meaning drives the search for knowledge. Curiosity is a blessing. The literature gives so much, never everything for the scenario is forever unfolding. Legitimate observations of small things accumulate into patterns that bring theories and their testing, exposing yet more uncrossed borders for those that arrive later. Those in whom curiosity turns to fascination and passion (Coates Palgrave, 2002; Carr, 1988; Schmidt, et al, 2002).