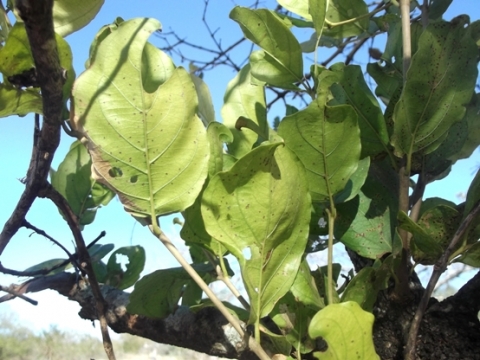 Previous
Image 2 of 50
Next

Combretum apiculatum subsp. apiculatum, the red bushwillow or in Afrikaans the rooibos (red bush) is winter deciduous. The positioning of the leaves on the stems may be alternate, opposite or in whorls of three. Their shape is also variable, obovate to elliptic and differing in width. The leaf base is lobed, rounded or tapering, the tip obtusely angled to somewhat rounded, usually sharply twisted. This twisting is notable in the photo.

Leaf texture is leathery, young leaves being sticky and shiny. Leaves are hairless apart from a few occasionally found along the midrib. The occasional specimen of the tree will be encountered, however, that confuses by displaying considerable leaf pubescence. Small tufts of hair and tiny scales may also occur on the lower surfaces of the leaves.

Usually five or six lateral veins angle out from the leaf midrib, sometimes up to ten; these veins are prominent below, recessed above. The lateral veins curve inwards near the margins, then disappear. Some secondary netveining may also be visible.

The leaves seen pointing upwards in the picture have uncharacteristically sprouted in winter from some coppice shoots; the tree being mainly bare. The photo shows their under-surfaces with protruding veins (Carr, 1988; Coates Palgrave, 2002).