Home » GENERA B-C » Brunsvigia » Brunsvigia striata umbel of fruit
Back to Category Overview
Total images in all categories: 8,890
Total number of hits on all images: 3,864,962 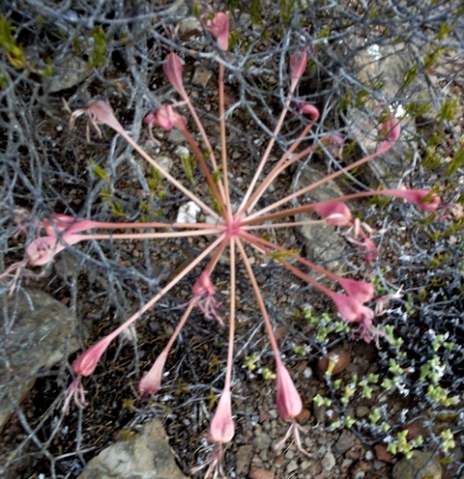 An umbel of ripening Brunsvigia striata fruit is slightly larger than the flower umbel preceding it, the pedicels elongating when the fruits are formed.

These umbels are typical of Brunsvigia flowers (and later fruit capsules). They earned the genus the name of chandelier lilies. The name striped candelabra has been noted for B. striata.

The straight peduncle below the inflorescence that holds it all in position emerges from unpromising gravelly ground with no leaves in sight. When all the capsules are ripe and the peduncle is dry, the entire above-ground structure becomes loose from the bulb and travels tumbleweed style in the wind on an unpredictable seed dispersal jaunt.

Then, after flowering is finished, the bulb responds by growing three to six large, ovate to obovate leaves. These broad leaves lie flat on the ground or spread in two opposing ranks. (This arrangement of leaves is called distichous.) The round-tipped leaves have thickened, cartilaginous margins that are entire and dull red in colour. Tiny protuberances are scattered along the dark green upper leaf surfaces.

Serving to replenish the bulb after flowering and fruiting had reduced its resources, the leaves build again for producing another inflorescence next season. After the winter growing season, when the seasonal set of deciduous leaves had performed their duties, they wither and disappear. This happens sometime during early summer (Duncan, et al, 2016; Manning and Goldblatt, 1997; iSpot).