Home » GENERA T-Z » Wurmbea » Wurmbea variabilis flowers
Back to Category Overview
Total images in all categories: 11,419
Total number of hits on all images: 6,200,074 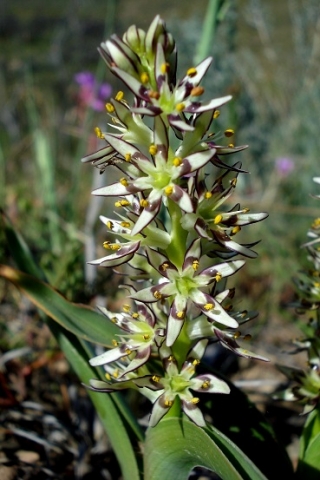 The flowers of Wurmbea variabilis are presented in a spike. They have no bracts. The flowers are pale green, white or cream with purple nectaries. A purple, U-shaped blotch halfway up the tepals, as well as purple tepal margins are present on the flowers in picture. The perianth sections are joined at the base. The six stamens point outwards, topped by globular yellow anthers.

The leaves may sometimes be dry by the time the flower stalk is developed. Flowering usually commences late winter, continuing until end spring. This one was seen during September (Bond and Goldblatt, 1984; Vlok and Schutte-Vlok, 2010; www.pacificbulbsociety.org).